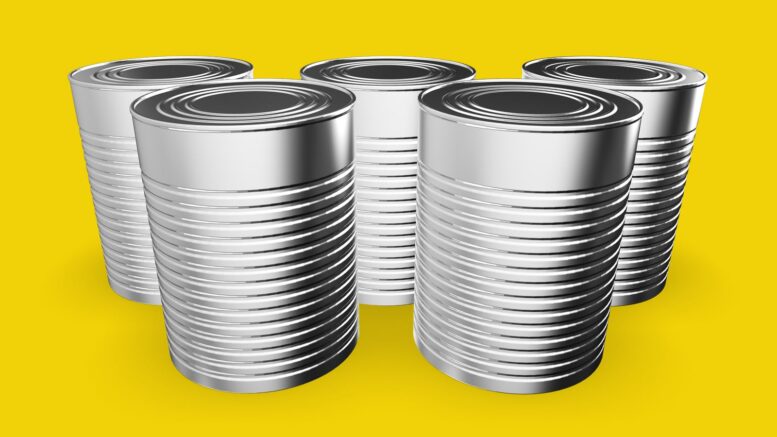 The tin can, whose primary quality is to ensure the preservation of food without adding ingredients, has become over time a must in our kitchens.

It allows us to find products that are not in season, but also to preserve them for several years. Here are seven things you need to know about canned foods.

1. How are foods canned?

First, the food is blanched, placed in jars for distribution, and is subjected to a heat treatment called appertisation.

They are then heated to a temperature above 100 °C for a variable duration depending on their type. They are thus rid of microorganisms, toxins and enzymes. This conservation process has evolved considerably in recent years, allowing better preservation of the texture and nutrient content of foods.

The containers, recyclable for the most part, can be made of glass, metal, plastic or even cardboard. Canning is one of the safest ways to preserve food, and the advantage is that it can be stored for many years.

2. Canned foods can be stored

First of all, you have to differentiate between the use-by date and the “best before” date.

Most canned foods have the best use indication, which means that the shelf life is longer. This expiry date makes it possible to consume the food safely, even if the indicated date has passed. However, it is possible that it has lost some of its qualities (taste, texture).

According to the Canned Food Alliance, a can is consumable two years after the date of purchase subject to conditions of proper storage (temperature below 23 °C).

These products have the longest shelf life, but once the box or jar is open it is recommended to put them in the refrigerator and consume them within forty-eight hours.

3. Canned foods are generally less rich in nutrients, but that’s not always true

In most cases, the canning process is losing a lot of nutrients. It takes less than five hours from the time the food is harvested to the time it is packaged. Perils vary according to food and nutrients.

For example, canned tomatoes have a higher lycopene content than fresh tomatoes, because the losses observed during storage are higher than those observed during canning. As for vitamins, they are destroyed by 30 to 50% because of the heat treatment.

For antioxidants, their conservation varies from one food to another, but it seems that bleaching is responsible for part of their destruction (beets lose about 64%, peas 46%, spinach 32% , Swiss chard and beans 29%, asparagus 25%, green beans 13%). But the lipids and the fibers remain stable so that the content of these nutrients is comparable to that of the fresh products.

Fatty acids and carbohydrates are preserved, and would even improve the digestibility of foodstuffs.

The minerals are preserved at 50% unless the bleaching is done by steam. The main concern comes from what is sometimes added during the canning process because canned juice is often high in salt, which increases the sodium content of food.

4. Canned foods lose some of their taste

Most canned foods lose some of their taste because it appears that the heat treatment denatures certain molecules.

In addition, the food is bathed in a liquid rich in sodium, or in vinegar for cabbage, beetroot and onions, which makes them lose their original taste, to give them a new saltier. However, fruit juice, consisting mainly of sugar, does not affect their flavor.

In some cases, additives are added to canned foods. They would help increase the nutritional value of foods while preserving their freshness and taste.

Self-made preserves retain the taste of food because the preservation method is more delicate and careful. In addition, in order to optimize the conservation of flavors, it is recommended to choose mature products of good quality.

5. Canned foods are not bad for health

More and more canning stability tests are being done by the manufacturers to verify that the canned goods are in line with the sale and are not conducive to various contaminations.

The process of heat canning is one of the safest because it prevents the growth of micro-organisms that cause diseases such as botulism. After the case on the presence of bisphenol A in cans, a product now banned, the composition of the containers is monitored and the batches declared nonconforming are destroyed.

Finally, it is necessary to consider the appearance of the canned because if it is dented, has rust or has a trace of deformation, it is strongly discouraged to consume the content. The consumption of canned foods is not prohibited quite the opposite. Canned foods can find fruits and vegetables that are not in season, and consume them all year. Their price is also an asset since they are generally cheaper than fresh and frozen products, and are almost of the same quality.

6. It is best to rinse food before consuming

It is mainly used for fish and meat. Part of the salt migrates into the food and salt concentration increases, so it is sometimes not recommended for people with cardiovascular disease or hypertension to limit their consumption of canned food.

In contrast, the juice of canned fruit is rich in sugar and can be consumed because it helps preserve the taste of food. However, it also seems that the juice contains some of the nutrients in the can, so you have to take care to read the product labels.

They indicate whether the liquid can be consumed and whether the food should be rinsed. Legumes must be rinsed, as this improves their digestibility. Indeed the rinsing eliminates carbohydrates and complex sugar responsible for poor digestion.

7. You can make preserves yourself

It is quite possible to prepare your own cans. The hygiene must be irreproachable to avoid any contamination and the risk of bacteria development.

It is therefore important to sterilize the jars beforehand and to ensure that they are not damaged.

To sterilize a container, simply boil it in water and allow it to air dry (do not wipe it).

It is also recommended to choose ripe and very fresh foods to extend their shelf life. They must then be blanched, placed in the jar and filled with a solution of saltwater and boiled up to three quarters.

Then close the jar and place it in a pressure cooker filled with water at 100 °C. It will be necessary to wait for the water to cool before removing the jars, which will have to be placed in a dry and cool place away from the light. It is advisable to consume them in the year following their preparation.

6 Foods to Avoid When Constipated

Is Watermelon Good for Constipation?