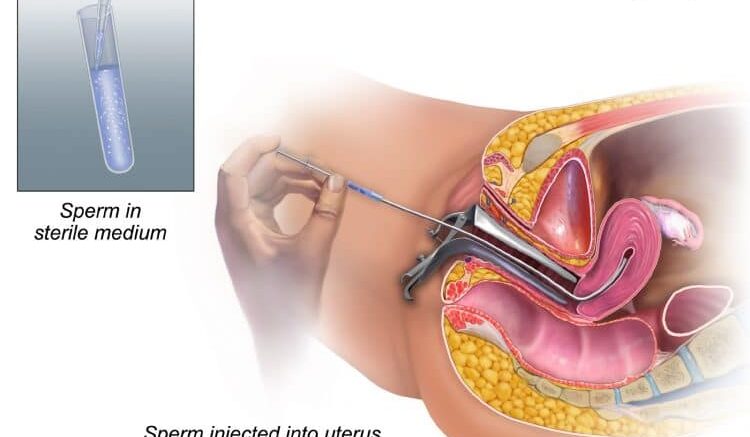 What is intrauterine insemination

What is intrauterine insemination? – Overview

Intrauterine insemination is a type of artificial insemination that involves the direct placement of sperm into a woman’s uterus.

This process is highly recommended as a first-line treatment to treat unexplained infertility in both males and/or females. In this technique, sperms are ‘washed’ and ‘concentrated’ before directly placing them in the uterus (closer to the egg), which relatively permits a higher number of motile sperms to reach the egg and in turn, increase the chance of a normal pregnancy.

Sperm can be used by either your partner or a donor. Washing serves the purpose of removing any antigenic proteins, infectious agents, and prostaglandins.

The sperms are concentrated in a small volume of culture media which is later inserted into the uterus through a transcervical catheter.

The procedure is simple to perform and at the same time, cost-effective and non-invasive.

A Brief History of IUI

The first case of human intra-vaginal insemination was described by John Hunter in 1770. Later on, in 1784, the first IUI was reported by Lazzaro Spallanzani which resulted in the birth of three puppies.

In the mid-1800s, 55 intravaginal inseminations were reported. Out of which only one pregnancy occurred.

In 1953, a simple method of preserving human sperm with glycerol was introduced and the first successful human pregnancy with frozen sperm was reported in the same year and was made public only a decade later.

The preference for IUI increased in later years and 1988, 127 births in 20 clinics as a result of IUI with pre-treated serum were reported. In the decades of 2000, IUI had been used as a treatment option for cervical hostility, malefactor, and unexplained fertility.

Efficacy and Studies on intrauterine insemination:

Predicting the efficacy of IUI is difficult since every couple will have a different response.

The success rate of IUI largely depends on several factors: age, BMI, body weight, poor sperm or egg quality, severe case of endometriosis, severe fallopian tube damage or blockage, the underlying cause of infertility, and so on.

Various research studies suggest that IUI is highly cost-effective compared to other measures, like surgery, or in vitro fertilization.

IUI comes with a few potential risks. The procedure is simple, non-invasive, and does not require anesthesia (painless). Some of the risks include:

Who are the candidates for this and why is this done?

There can be multiple factors playing a role in or affecting pregnancy. Any person unable to conceive a baby normally would be the best candidate for Intrauterine insemination. IUI is mostly used in people:

Both, males and females, diagnosed with unexplained infertility problems are good candidates. IUI helps to improve low sperm count or motility of sperm inside a female tract for increasing pregnancy chances. IUI may be helpful for males having infertility due to ejaculatory disorders.

Females diagnosed with mild endometriosis and/or those with unreceptive cervical mucus and anovulation are other good candidates.

Females of age 35 years or higher wishing to conceive also can opt for IUI.

IUI may not be effective for:

Intrauterine insemination is a simple, non-invasive, cost-effective, and relatively low-risk treatment that might work best for many females or couples trying to conceive.

It is the first-line treatment option for infertility due to cervical factor, anovulation, male factor, immunological factor, or unexplained fertility and females diagnosed with minimal endometriosis condition.

The procedure is painless and does not carry higher risks. Few side effects include the potential risk of infection and slight vaginal bleeding, ectopic pregnancy, or multiple pregnancies.

This technique can be a wonderful option for females or couples who have been struggling with normal conception.

What is In Vitro Fertilization