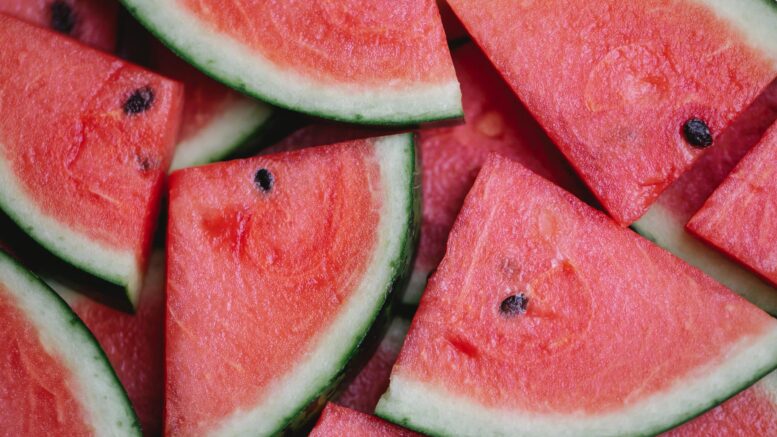 According to their localization, it is customary to divide them into infections of the lower sections (urethritis, cystitis) and conditions of the upper sections (pyelonephritis-kidney inflammation).

Most commonly UTIs develop as a result of the penetration of bacteria usually present in the intestine or on the skin of a person.

More than 70% of infections are caused by the bacteria Escherichia coli. Other common bacterial causes are Proteus Vulgaris, Pseudomonas aeruginosa, Klebsiella pneumonia, and gram-positive pathogens like Staphylococcus saprophyticus, Enterococcus faecalis, and Streptococcus agalactia.

The main principle of treating UTI is supportive treatment with increased fluid intake, which may be sufficient. Also, antibacterial therapy should be recommended.

On a bright note, an anti-inflammatory and intestinal-healthy diet can alleviate the symptoms.

Now which sweet and juicy summer fruit with stripes has approximately 93% content of water?

That’s right, and The Answer is Watermelon

In summer counters of markets and shops are rapidly filling up with watermelons. Let’s see what their benefit is for UTI, and what the harm is. What advantages are hidden under the striped skin of a watermelon?

Does watermelon help with UTIs?

1) Watermelon Is A Natural Diuretic

You might have heard about “diuretics” if you or your close one suffers from high pressure. A diuretic – is a type of substance that increases urination.

As I already stated, watermelon is full of water; it increases the urine flow without straining the kidneys, which is beneficial during inflammatory processes of urinary structures – as in UTIs.

Worthy of mention urinary stones can because of urinary infection, the mainstay of prevention is taking a lot of fluids or diuretics,

We imagine it as a “washing out” infection and flushing the bladder.

We consume about 10 mg of Vitamin C per 100 grams of watermelon; this, in turn, prevents the spread of different bacteria, viruses, and parasites by acidification of urine. It is often a recommended supplement to prevent UTIs in case of a history of recurrent UTIs.

There was an interesting study conducted by the Department of Urology, New York University Langone Medical Center, where a total of 110 pregnant women were randomized to receive ferrous sulfate, 200 mg/d, folic acid, 5 mg/d, and ascorbic acid-Vitamin C, 100 mg/d, or daily ferrous sulfate and folic acid only.

At 3 months, the presence of urinary infections in the ascorbic acid (Vitamin C)-treated group was significantly lower than in the ferrous sulfate and folic acid-only group

The red color of watermelon is due to antioxidants called lycopene. It fights free radicals thus reducing the degree of cell damage caused by inflammation. Watermelons contain over 4,500 micrograms of antioxidants per 100 grams – pretty powerful! And by the way the riper the fruit, the more lycopene it contains.

The liver does a great job of getting rid of most toxins we consume. Most notably ammonia – a waste product of proteins, which after the liver is processed by kidneys.

Watermelon helps the liver with the process of detoxification, thus letting the kidney rest, as they are already under stress from inflammation.

Watermelon is known to have a great influence on blood pressure management.

A 2014 year study by Florida State University supports that diet “The pressure on the aorta and the heart decreased after consuming watermelon extract,”

The type of Vitamin A abundant in watermelon is proven to have positive effects on UTI and decrease the number of recurrences in patients suffering from recurrent UTIs. According to a study by Pubmed Vitamin, supplementation may have an adjuvant effect on treating RUTI.

Eating several watermelons daily has a refreshing effect and may “cleanse” the kidneys.

The bladder will be flushed out, the symptoms will alleviate and you will feel rehydrated and satisfied.

But always remember, if your symptoms become severe and uncomfortable, no watermelon or any other food can be substituted for a medical appointment.

Is Watermelon Good for Diabetes?

Is Watermelon Good for Arthritis?